Falling for this time of year…

Fall has come to mean everything from foggy mornings and blue sky afternoons, crunching leaves in the park, to baking gingerbread men and picking the perfect pumpkin.  I’m completely falling for Fall.

Since Andrew has been the recipient of several comments that he looks “really tired” at work, he took the day off recently and we all went up to The Farm in Snohomish for a day of picking pumpkins and getting in touch with our farmyard selves.  The kids just loved the baby pigs, the hay maze, and the old tractor.  Luke wouldn’t go on the hayride for anybody, but had a great time with the wheel barrows and it was very sweet to see the kids faces as they petted a tiny kitten and a big highland cow!  It was fun to watch the kids coming down the slide in the old red barn only to go flying off the end as Luke did or to watch Emily’s very lady like plop on the hay as she reached the bottom clutching her daddy’s hand.  It all added up to two “really tired” kiddos falling fast asleep on the way home – hooooray!

A few days before, Luke and I got the urge to make Gingerbread men.  Since it seems all my friends and sisters in law are either pregnant or just had babies, I thought it was the least I could do, you know, because I’m all about multiplying and replenishing, even if for me right now that’s just the cookie jar.  Luke is such a good helper – testing the dough every now and again to make sure it still tasted good, and making lots and lots of “gingerbread men babies” – his term, not mine.  Even though this was a first for me, they came out really well – super soft and just so yummy I may have to make more little babies in time for Santa’s visit (I know he would appreciate the gesture too).

Although I’m not a fan of the cold, I just love what it’s doing to the trees, and from my kitchen window, as the sun comes up behind the house, the trees across the street light up as if they are on fire – the reds, oranges, and yellows brighten my morning and remind me of how much our Creator appreciates beauty.

So even though I’m not looking forward to the icky mess that I’ll have to pull out of my pumpkin in the coming days or these chilly mornings, I am very quickly falling in love with the Season. 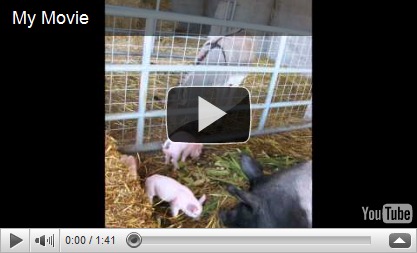 Anyone who has tried to have Family Home Evening with toddlers knows that it is more like the “impossible dream” than a spiritual pick-me-up of family togetherness…  Andrew’s sister Rebecca recently shared with us a wonderful idea of having your spiritual lesson over breakfast when the kids are a little more spry.

Well, so far we’ve done it for 3 Mondays in a row and each of them has been such a sweet start to the week I only wish we’d discovered this wonder sooner.  I get up early…er..earlier….and make something special for breakfast, and then Andrew and I trade off teaching a little lesson including a picture and a song to go with it.  One morning I taught about the Creation and as I explained that Heavenly Father and Jesus made the animals and the flowers and trees and this beautiful world for us, Luke responded with “for me?” – yes Luke, He made it for you.  And you, and you, and you.  The kids both sat intently watching the picture of the creation and listening (over and over as requested) the song “My Heavenly Father Loves Me.”  I felt like I wanted to just capture that moment and hold onto it forever.  What an awesome responsibility and privilege to teach these sweet children about where they came from and about their God who is mindful of and has a plan for them.

I love when I find something that really works especially when it makes my job as a parent more fulfilling, and this does.  Right, now that I’ve got that one figured out, what’s next?  Oh yes, trying to gently explain to Luke that we don’t say the sacrament prayer in lieu of a blessing on the food before dinner.  But you know, he meant well, and hey, he’s paying attention!

I am Mommy; cleaner of messes!

I did not cry, I didn’t even yell (well not until I thought Emily was really going to burn herself), I think I handled myself in a pretty orderly way really.  There were messes, two of them, and they were big.

The first one happened right as I was going to have achieved an almighty feat – making dinner with two kids clamoring for food at my knees “me some, me some.”  With no husband in sight yet, I was desperately trying to get a quiche in the oven so that we could eat at 6.  Well, as I opened the oven I reached over to shield Emily from the door “don’t touch, it’s hot” I kept saying.  Suddenly, the contents of my quiche dish emptied almost entirely into my oven, spreading it’s chunky, milky, cheesy contents over most of the door, down the crack onto the floor and partly into the oven itself.  Let’s not forget the oven drawer which aligns perfectly so that the mess also enters it, spreading the love all over several cooling racks and pans.  NICE!  Where do I start?  Oh, and I still have two curious kids who are standing in amazement that mommy hasn’t lost it yet.

Well, the egg mess is cooking on the door and I’m trying to think about all the places I need to get with the paper towel, when Emily reaches out and places her palm right down on the door!  Aaaaah!  Well, Luke lost it.  He just doesn’t deal well with screaming, poor kid, I don’t either (by the way, I screamed, Emily sympathy cried for Luke).  Andrew walks in the door a few minutes later to greet a sorry pile of distraught people consoling each other on the kitchen floor.  We ate dinner at 6:15pm and mommy didn’t even hit the chocolate…well until later.  Thank you PF Chang’s for some good desert on a very well timed Girl’s Night Out with my wonderful friend Brandee.  Good timing would continue with the purchase of a baby gate to keep the kid’s out

The very next morning I’m scoffing a bowl of cereal before it hits the soggy stage and I hear an almighty crash.  I knew the kids were by the TV but there was no sound of commotion so I still don’t know how it happened.  When I ran in, there lay the entertainment center door in about a million pieces on the floor in between two very surprised looking children.  I reached over and picked Emily up instructing Luke to stay put.  When he was reunited with her in his bedroom I told them both to read books or play until I’d cleaned up.  “Right…” what was I thinking, there was no way they were going to do that after what just happened?!?  I turned around to see the answer, my baby gate still in the box (I thought the kids had knocked that over when I heard the noise,) “thank you!”  A few minutes later it was installed and 30 minutes of kid free time later (apart from the pleas for freedom) we had a safe living room.  And you know, I kinda like the TV stand better this way…it’s just as well the floor needed a sweep, the door needed cleaning, and I needed another experience to practice keeping my cool.

I am grateful for husbands who offer to go get dinner when it spills all over, paper towels – costco style – baby gates, and the fact that in all of it my children escaped unscathed even though there was at least one shard of glass that had impaled the wood of the TV stand itself.  Tragic stories, lots of tender mercies….