Those Things That Kept Me So Busy…

Here are some pictures of the bowties and skirts that I made for the wedding.  Originally I was thinking I would make Emily a skirt, then it  became a skirt for her and her cousin, then it was a skirt for me, oh and seven bowties for all the little boy cousins too…one of who objected to wearing green so it became eight (thankfully in the end he decided it was a good idea to match everyone else for the big day – and without any bribery – which is more than I can say for my own son!!)  Suddenly I was doing that and the table décor for the luncheon and it made me wonder what I would ever do with my time after the wedding – I’m so funny when I think like that!!

I found the tutorial for the little girl’s skirts here.  And the bowties, well, I called mother and we worked that out over the phone.  You can’t tell in this picture but the top of Emily’s skirt matches my own – gotta do matching outfits while she still doesn’t mind.  Thanks to a gorgeous green tie from the groom, our family looks quite nice, all matchy, matchy.  Emily looks a little concerned because she shares her name with the bride and was worried she was the one getting married.  Poor kid! 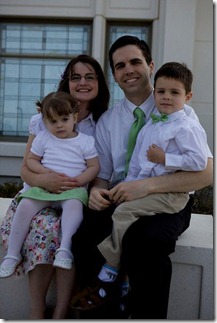 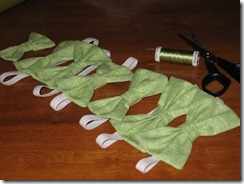 Cheryl, thanks again for everything you did for the luncheon decorations! You'll be pleased to know that in the addition to the silk flowers being used for the tables and an emergency bridal bouquet in Twin Falls, Hannah used them to make hair barrettes for the brides maids here and we put tiny blossoms in the tulle around the tables at the open here and small bouquets on the guest book table and wedding video table. It's like you were here participating. Thanks!! Love, Mom