We adventured down to Portland last weekend to spend the holiday with our Webb cousins (Andrew’s sister).  It was Saturday afternoon and we’d already been out in the crowds, with kids falling asleep in the car, soaking up the Summer sun that had finally graced us.  “Do you think we could get a tour at the fire station?” I asked.  I had been wanting to take Luke to the Fire Station for a tour but didn’t want to take him alone because I didn’t know if he would like it or be scared.  Well, with two other cousins around his age, I though this would be perfect.  Well, Rebecca made some calls and in 20 minutes we were off, walking about 2 blocks to get our personal tour.

It was so fun, and Luke just ate it up.  He probably talked more than the Fireman, telling him all about the trucks (this kid has studied).  He felt very comfortable hopping into the chief’s truck and announcing he was “going to the airport.”  Adorned with a badge and fire hat we left the station with one very happy little boy who announced more than once that he was going to be a Fireman when he grew up.  My mother heart was happy – mission accomplished.  The mission?  I don’t care if he’s a firefighter, but I do want him to dream, and believe he can live it. 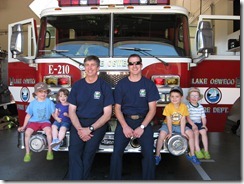 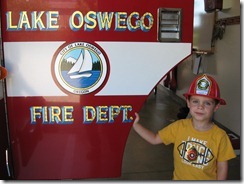 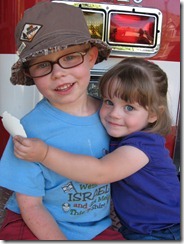 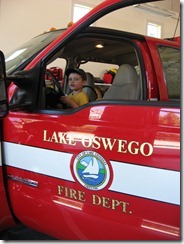 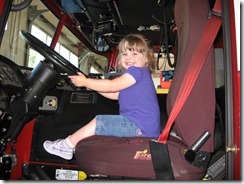 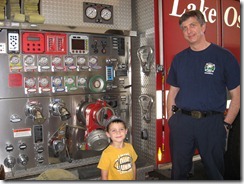